The Office of the Auditor General of Norway today (18 May) published an English version of a damning report into the Norwegian salmon farming industry.   Download in full online here

A summary of the report includes: 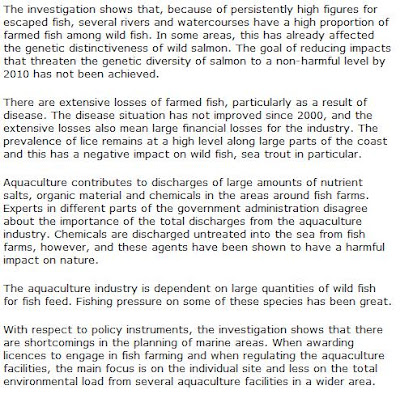 The report points out that Norwegian aquaculture production has doubled in the the last ten years: "The total production of farmed fish and shellfish has doubled in the last ten years alone, from approximately 500,000 tonnes in 2000 to more than one million tonnes in 2010. Salmon accounts for around 90 per cent of the total production. The sales value of aquaculture production amounted to more than NOK 30 billion in 2010."

No wonder then that there are significant problems.  "Several of the environmental challenges facing the industry are due to the overall environmental load being too great," states the report.  "The environmental challenges are greatest in geographical areas where there are many fish farms. In these areas, there is increased prevalence of fish diseases and lice, and the proportion of escaped farmed salmon among wild fish is substantial. While this applies in particular to several areas in Western Norway, it can also be a challenge in other areas."

The report presents shocking details on the number of dead and disease farmed salmon: "More than 47 million salmonids were lost in 2010. A large proportion of the fish were lost due to disease.  The disease situation has not improved since 2000." 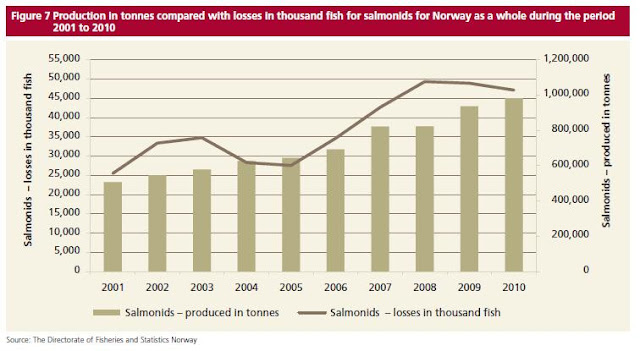 Moreover: "The investigation shows that joint efforts to combat salmon lice and comprehensive regulations do not appear to have reduced the overall prevalence of salmon lice to any great extent. There are also challenges relating to resistance to several delousing agents, which has further reduced the possibilities of combating the problem."

The discharge of untreated toxic chemical discharges has also increased: "A permit is not required to discharge chemicals from approved medicines from aquaculture facilities.  Chemicals are therefore discharged untreated into the water from fish farms. The investigation shows that, because of the lice situation, so-called chitin inhibitors have again been introduced to combat the problem. Discharges of these chemicals increased from 0 kg in 2008 to 3.4 and 3 tonnes in 2009 and 2010, respectively."

A press release - 'Significant Environmental Challenges in the Aquaculture Industry' - issued by the Office of the Auditor General of Norway (6 March) included: 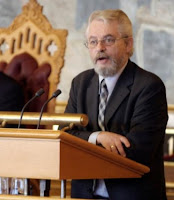 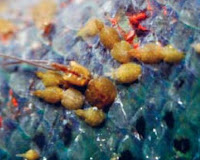 The Norwegian version of the report was published in March and submitted to the Norwegian Parliament (Storting).  According to the Ministry of Fisheries, several of the issues cited in the report will be considered in a new report to the Storting towards the end of 2012.  Following up the Office of the Auditor General's remarks will be a "priority task in the time ahead." 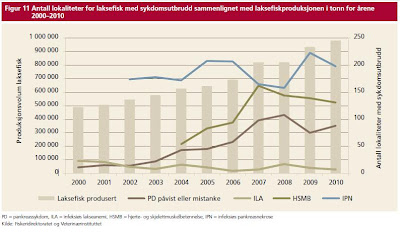 Kurt Oddekalv, leader of the Green Warriors of Norway, said: "The Auditor General's report echoes what the Green Warriors have been arguing for decades that Norwegian salmon farming is unsustainable and a pollution hazard. Consumers around the world should rise up in protest against this filthy industry and boycott Norwegian farmed salmon. This report is one more nail in the coffin of the disease-ridden Norwegian salmon farming industry." 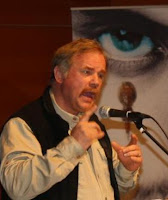 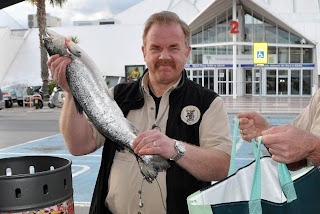 "Green Warriors of the World must unite to fight the Norwegian fish farming menace," said Don Staniford of the Global Alliance Against Industrial Aquaculture. "Norwegian-owned salmon farming is spreading infectious diseases, genetic pollution and toxic wastes all over the globe as well as at home in Norway. The salmon farming industry is an international embarrassment to Norway and is threatening Norway's green and clean image abroad." 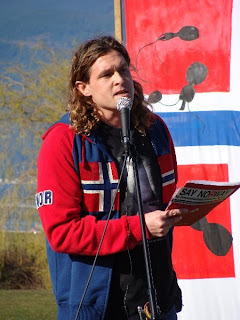 "The Norwegian General Auditors analysis of the fish farm industry directs massive critics to the public administration," reported the Green Warriors of Norway (7 March).  "This analysis makes the Green Warriors report about the environmental impact from fish farming not easy to hide from. Norwegian Government have hereby, officially knowledge to decide what's best for the fantastic marine life and stunning fjords of Norway: Closed Containment Systems!"

"Norwegian politicians now have to act," continued the Green Warriors of Norway.  "Sadly, the Norwegian minister of the coast and fisheries owns multiple fish farms. Therefore, we kindly ask you to spread the words, and don't eat farmed salmon!" 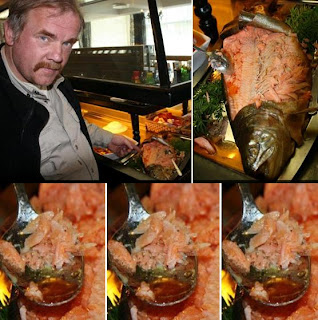 The Norwegian Hunters & Fishers Association (NJFF) also seized on the report.  "The Office of the Auditor General of Norway provides in many respects a harsh criticism of how the aquaculture industry has been in operation," said Øyvind Fjeldseth (7 May).  "The report also shares our surprise that, after nearly three decades, there are still ever so many technical questions regarding the salmon farming industry's impact on the environment."

NJFF also criticized the reaction of Norway's Minister of Fisheries, Lisbeth Berg-Hansen, who brazenly (and bizarrely) claimed in Dagens Naringsliv (7 March) that the report represented confirmation that the Norwegian Government was doing a good job. 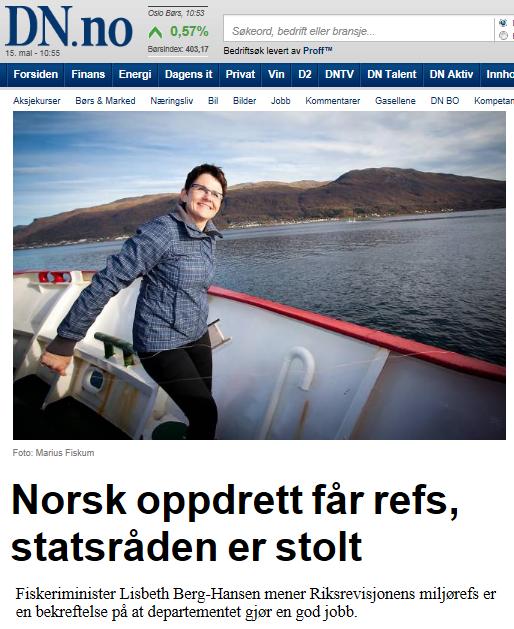 "This should be a time for humility not self-praise," wrote NJFF's press officer Espen Farstad in an Editorial in  the Norwegian newspaper Dagbladet (12 March).  "The problems continue, despite exceptionally strong evidence, numerous plans for environmental improvements, and strong political word about a vision of 'zero escapes'." 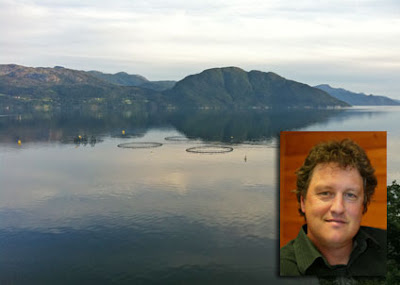 "Let me spell this out in plain language: the aquaculture industry is engaged in a business that is not sustainable.  Wild salmon are suffering.  The responsibility lies with the Fisheries Minister.  When the Auditor General points out this fact, should not the minister then take responsibility and apologize humbly that she did not do a proper job?"

Speaking on TV2 News (12 March), NJFF's Alv Lyse said: "There are significant environmental challenges of today's salmon farming industry. This report from the Office of the Auditor General of Norway should be given great weight." 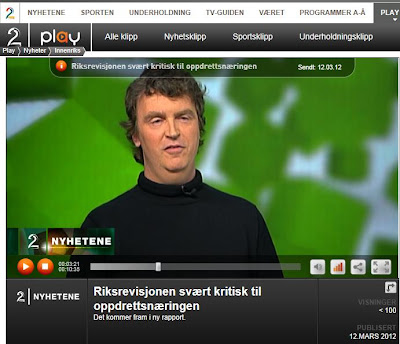 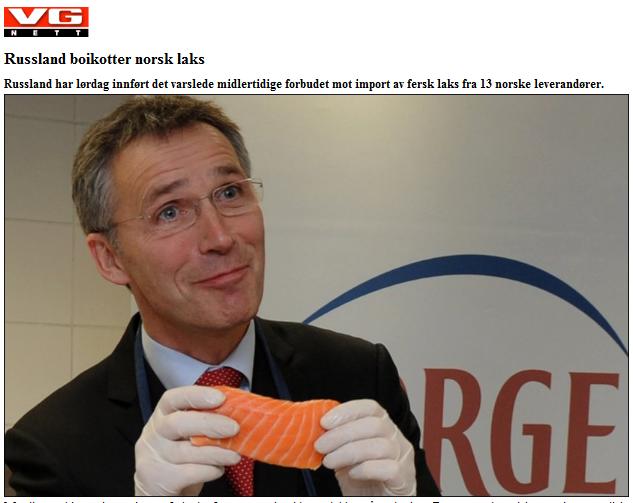 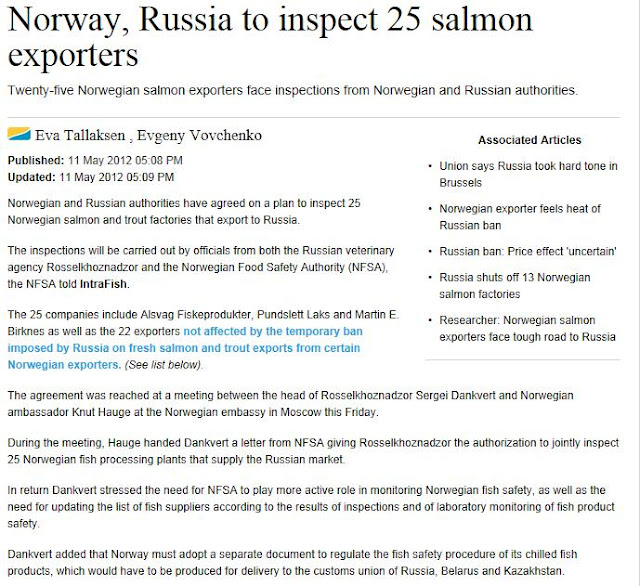 The list includes the world's largest salmon farming company (Marine Harvest) as well as Grieg, Leroy, Fjord Seafood and Salmar (Cermaq is already on the list of 13 processing plants banned on 5 May from exporting to Russia): 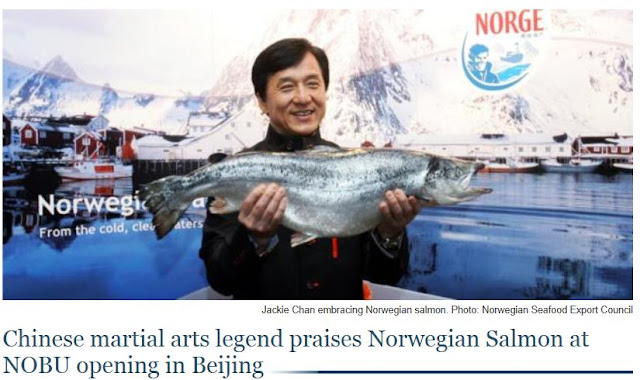 In British Columbia, Canada, there is a burgeoning backlash against Norwegian-owned companies (who control over 95% of salmon farm production) and the spread of infectious diseases.  “A newly identified Norwegian virus that affects salmon has made its way into Canadian markets, with test results confirming the presence of the virus in 44 out of 45 farmed salmon bought from Vancouver supermarkets,” reported The Vancouver Sun (16 April). 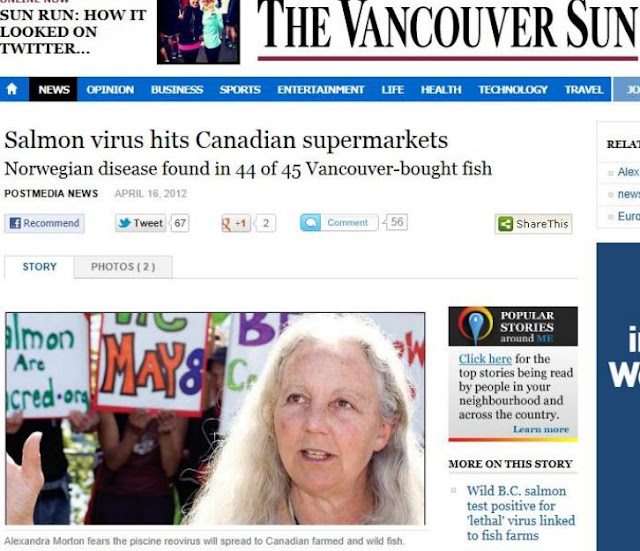 Even people in Norway are falling out of love with Norwegian farmed salmon - watch this new video from the Green Warriors of Norway (online here)! 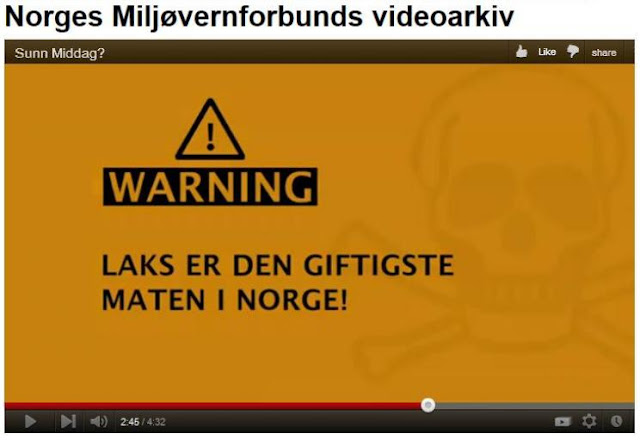 [Warning: Farmed Salmon is the Most Poisonous Food in Norway!] 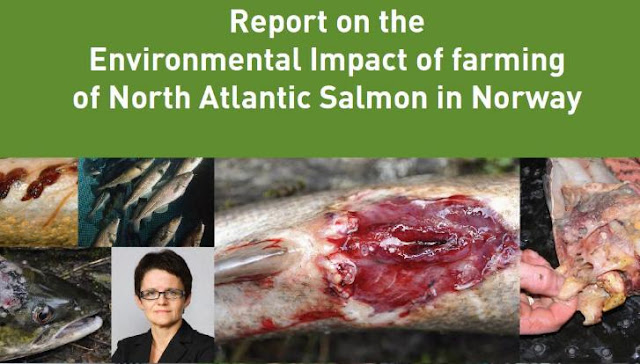